As part of its 150th anniversary festivities, South Bend has unveiled three designs that could become the city’s next official flag. Public voting is slated for the next month and a new flag could be adopted early next year.

The city currently uses a white flag with the South Bend seal as its official symbol.

Voting is set to close January 8. It is open to the public and you can connect to the online ballot by clicking here.

Common Council President Tim Scott will carry a resolution early next year pushing for the adoption of the winning design. The finalists were selected by the South Bend 150 Committee members. They are: 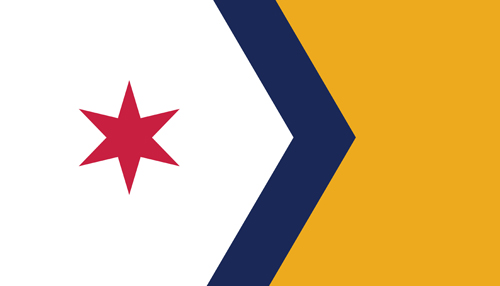 The city says the red star is the focal point that represents South Bend’s passion, energy and determination. The six points of the star is symbolic of six council districts. The white color represents the city’s diverse cultural and religious influences and the initial blue s-shaped stripe symbolizes the St. Joseph River and invokes the city’s name. The white stripe is from the city seal and is symbolic of peace and the remaining blue is connected to stability, confidence and innovation. It was submitted by Mishawaka-based Pathfinders Advertising & Marketing Group Inc. Director of eMedia Garrett Gingerich.