Fort Wayne-based Ruoff Mortgage says it is expanding its footprint by agreeing to lease space at the future Electric Works mixed-use innovation district.

The lender says it has signed a letter of intent to locate a growing portion of its Fort Wayne-based global headquarters team at the former General Electric campus.

What’s unclear is if this investment replaces Ruoff’s previously-announced plans to build its global headquarters in downtown Fort Wayne.

A company spokesperson on Friday told Inside INdiana Business, “We are no longer planning to build downtown. We are growing so quickly that there isn’t enough time or space on that site to handle our rapid growth and business needs.”

Last October, Ruoff and the city of Fort Wayne announced plans for the lending company to build a $43 million corporate headquarters in downtown Fort Wayne. At the time, plans called for a nine-story structure at the corner of Ewing Street and Jefferson Boulevard near Parkview Field.

But with those plans apparently off the table, the company is now in the process of determining which divisions of its operations will expand to the Electric Work’s West Campus when it opens in 2022.

“While we are still formalizing the strategy around how that space will be utilized, we felt it important to make an investment in the community with this project, which has garnered incredible support and excitement,” said Mark Music, president and chief executive officer of Ruoff Mortgage.

The fate of the multi-million development project has been in limbo in recent months as the city’s redevelopment commission pulled its support for the project.

But two weeks ago, RTM Ventures, the developer behind the Electric Works mixed-use innovation district, and Fort Wayne Mayor Tom Henry announced a tentative agreement to move the project forward.

“Ruoff Mortgage is a well-known brand and an incredible home-grown success story, and we’re excited to help Mark Music and Ruoff leadership team continue their growth and success here in Fort Wayne,” said Jeff Kingsbury of RTM Ventures. “Like many growing companies, they recognize the challenges in attracting, retaining and growing a talented workforce here – and like Do it Best and our other tenants, they also recognize the unique and critical advantages Electric Works offers them in meeting that challenge directly.”

Kingsbury recently told Inside INdiana Business the first phase of Electric Works is expected to cost $280 million to complete and the developer has already secured more than $215 million in private funding, as well as federal and state tax credits.

Do It Best Corp. announced in July it had signed on as the anchor tenant of Electric Works. 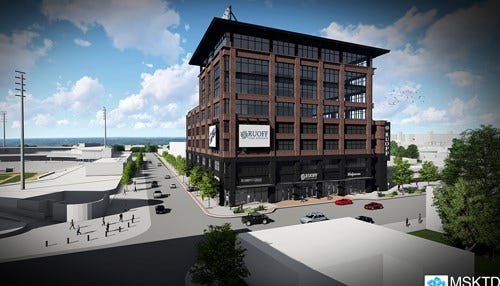