Lt. Governor Suzanne Crouch and the Indiana Office of Tourism Development has named Chief Executive Officer of the Indianapolis Zoo Michael Crowther this year’s recipient of the Will Koch Indiana Tourism Leadership Award. The award announcement was part of the Lt. Governor’s annual Hoosier Hospitality Awards at the Indiana State Fair.

Crowther came to the Indianapolis Zoo in 2002 and during his tenure, the zoo has attracted 1.2 million visitors annually, with 30 percent of the guests in 2017 coming from outside Central Indiana and 14 percent visited from out of state.

During his job interview, Crowther developed the concept for Indianapolis Prize, which is the world’s leading award for animal conservation.

The Will Koch Indiana Tourism Leadership Award is presented annually and is the highest tourism honor given by the state. The award is named for the late Will Koch, long-time owner and president of Holiday World & Splashin’ Safari. The Indiana Office of Tourism Development and the Koch family established the honor to pay tribute to Koch’s many meaningful contributions to tourism, business and society.

Lt. Gov Crouch and IOTD also presented 17 representatives of the tourism industry the Hoosier Hospitality Award for their high level of service in tourism-related jobs at hotels, restaurants, attractions and other destinations. 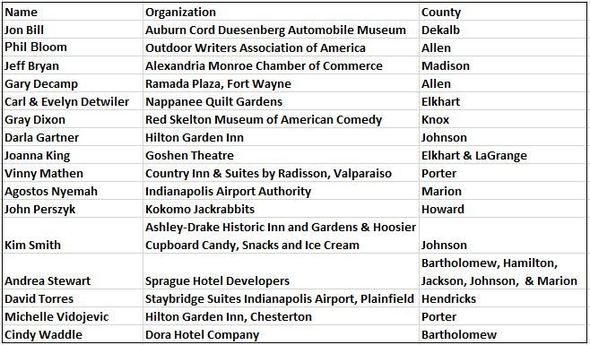