The mayor of Noblesville says the planned 274-acre Hyde Park development on the city’s east side will be the “second coming” of an area that has seen major growth over the past several years. The city this week announced plans for the project, which will include commercial, residential, office and recreational space. Chris Jensen says the project will complement the nearby Hamilton Town Center and create a space for people to live, work and play.

In an interview with Inside INdiana Business, Jensen said the idea of livability and walkability has changed.

“We’re seeing folks that now want to kind of live, work and play in a similar community,” said Jensen. “We’re going to see a lot more remote working, for example, all across the state of Indiana and all across the country and the world, so making sure that we have some innovation space involved here [is important]. We’re seeing across the Midwest that a lot of these big mall areas like Hamilton Town Center need residential in conjunction with them to help support that retail space.”

The project is a comprehensive master plan for the area and Jensen says each individual development will be brought before the Noblesville Common Council for approval along the way. He says the addition of innovation space is one of the key elements to the project.

“We’re working with different corporations and economic developers within the area to bring space for folks that are in the innovation world, in the makerspace, if you will, in the high-tech space to launch their businesses, to focus their business in this area. We have a corporate campus just to the north. So, the idea is to make sure that we have an attractive space for entrepreneurs to set up shop here in the Hyde Park area and then launch into our corporate campus.” 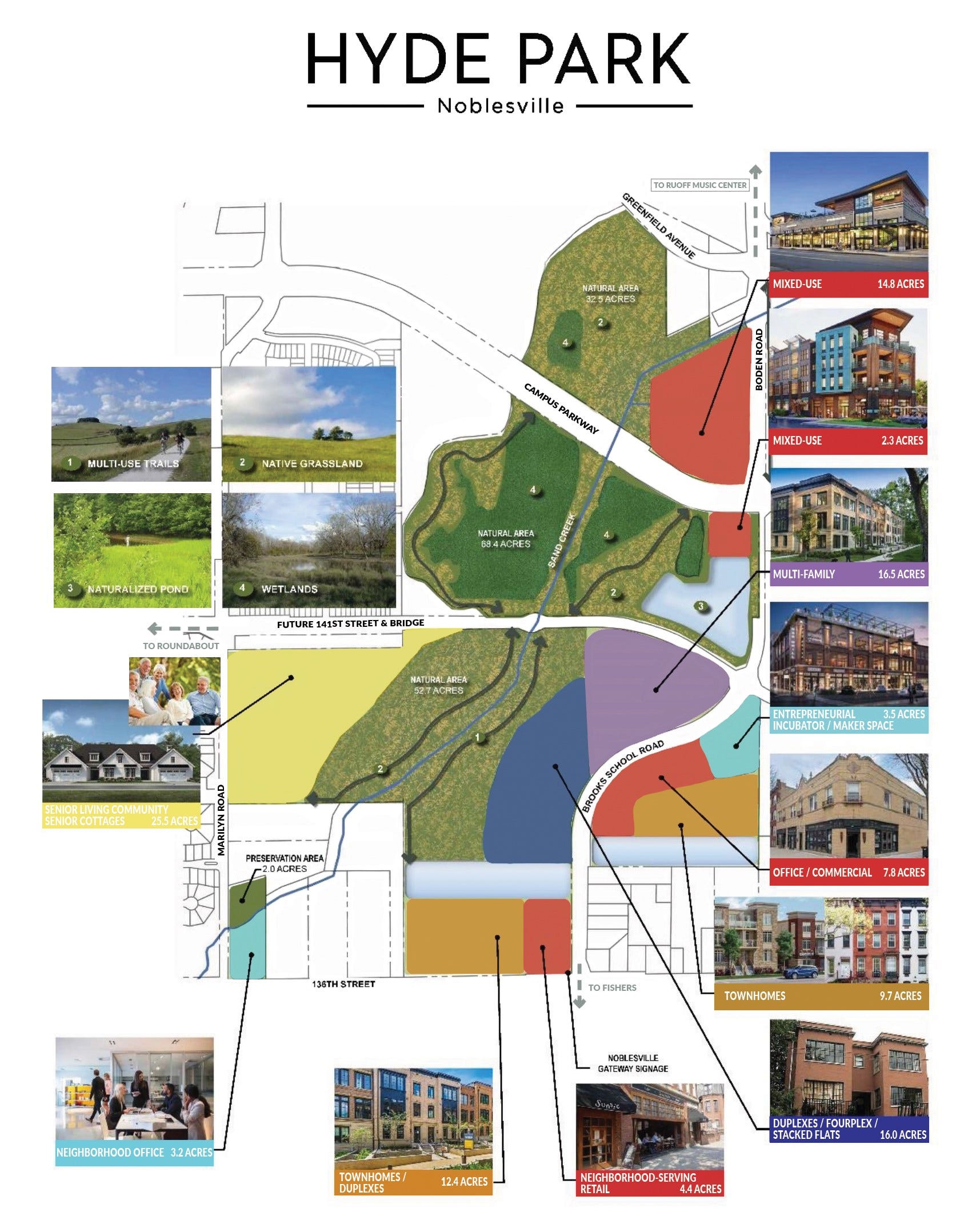 The city says once construction begins, it will take about 10 years to complete. Jensen says being proactive about how to develop the space has been key.

“By master planning this 270 acres, we can speak directly to the development community and let them know what we want to see in this part of the community, while still providing checks and balances for our city council, for our administration to really view this project by project. We can incentivize that appropriately where we see fit over the next 10 years, but kind of lay out a vision and then allow the private sector to react to that vision and come and bring their best foot forward.”

The recreational aspect of the project is another key component, according to Jensen. The development will include a 162-acre park, as well as more than two miles of trails.

The mayor says there already is interest among developers with expectations of a number of proposals going before the city council over the next year. The overall cost of the project is yet to be determined, though the city will provide up to $35 million in developer-backed TIF bonds, which Jensen says will create zero risk to taxpayers.

Construction on the project is expected to begin before the end of 2022.

Jensen says the idea of livability and walkability has changed, especially over the last year.