St. Joe Farm is now an event venue in St. Joseph county. It once served as a working farm for Notre Dame. (photo courtesy: Wes Mills)

On a 210-acre tract of farmland in northeast St. Joseph County, Fort Wayne-based Indiana Michigan Power is installing a solar farm, which it says will be capable of producing 22,000 kilowatts (20 megawatts) of clean energy.

While the land in the community of Granger may look like just another piece of fertile Indiana soil used to grow corn or soybeans, this particular patch of land is rich in history, as is one of I&M’s biggest customers of the power the solar facility will generate.

A subsidiary of American Electric Power (NYSE: AP), I&M says the $37 million project will be the utility’s largest solar project. Its 57,000 photovoltaic panels will be able to generate enough energy to power 2,700 homes.

“It is not only a generation opportunity, but it’s also an educational opportunity to help people understand more about green generation,” said Brian Bergsma, director of corporate communications and government affairs with I&M. “We see this as educational for kids in the community, for civic groups, for business leaders, for attracting economic growth in the area for business looking for green technology.” 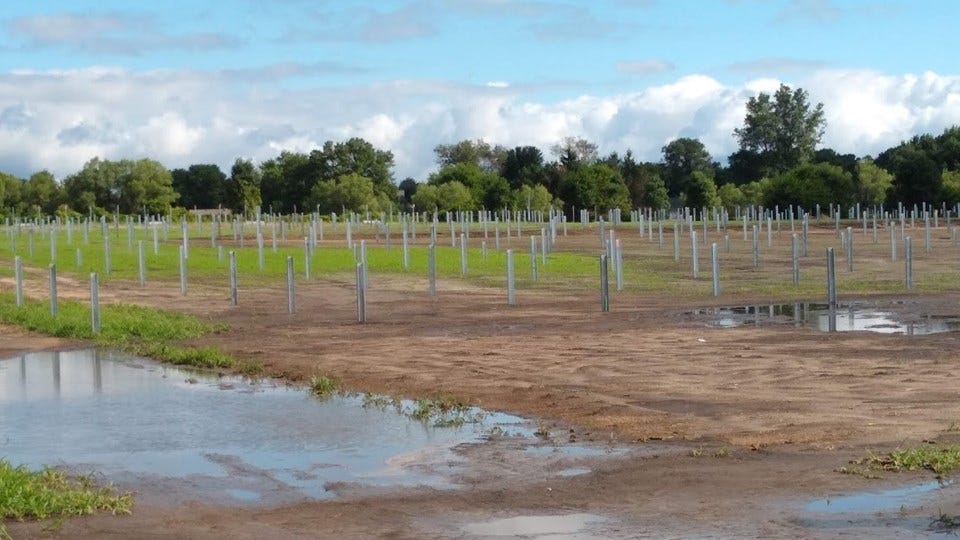 These posts will hold 57,000 voltaic panels on a solar farm under construction by Indiana Michigan Power. (photo courtesy: Wes Mills)

It has already attracted business from the University of Notre Dame. The school announced it will purchase 40% of total output from the facility in the form of clean energy credits. Notre Dame said those credits will be equal to 10% of the university’s total demand for electricity, helping ND meet its goals toward clean, renewable energy.

“This is the next big step for us with regard to the use of clean, renewable solar energy to aid or offset campus power production, and a piece of a larger puzzle in terms of our overall approach to sustainability,” said Paul Kempf, assistant vice president for utilities and maintenance at Notre Dame. “We’re pleased to partner with I&M on this project and look forward to the benefits it will provide.”

The connection to Notre Dame is more than contractual – it is also historical. This parcel is adjacent to what was known as Saint Joseph’s Farm, owned and operated for about 130 years by the Congregation of Holy Cross, which is affiliated with Notre Dame. 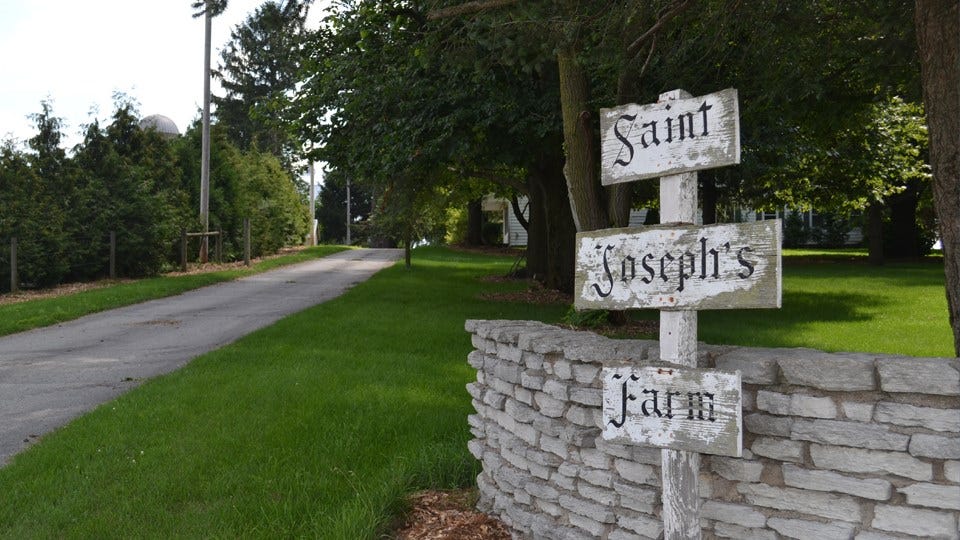 Father Edward Sorin, who founded the university in 1842, purchased 1,300 acres of farmland in 1867 as a place to eventually produce beef, milk and other fresh produce for the growing university in South Bend about 10 miles away. According to university archives, a majority of food production did not begin at Saint Joseph’s Farm until the 1930s.

“The farm was fantastic. They fed all the students and staff,” said Travis Childs, director of education at The History Museum in South Bend. “They grew all kinds of crops, including things you wouldn’t think of, including peat for fireplaces on campus.”

Peat, of course, is no longer the power source of choice to heat the campus. For decades, the university used a coal-fired plant to generate heat and electricity. In recent years, the school has been reducing its coal-use and invested in green energy to reduce its carbon footprint.

“This partnership enables us to meet our goals around sustainability, and one of those goals is to generate at least 10% of our energy from renewable or recoverable sources,” said Carol Mullaney, senior director of sustainability at Notre Dame.

In addition to energy credits from the solar farm, Notre Dame has installed several smaller solar arrays on or near campus. It has also partnered with the city of South Bend to construct a hydroelectric generation facility on the St. Joseph River in downtown South Bend.

Primarily underground, the hydropower plant is expected to generate about 7% of the university’s electrical needs and offset nearly 9,700 tons of carbon dioxide annually.

“All these projects — and other projects like conservation projects and energy efficiency projects — are working together to reduce our carbon footprint, with the long-term goal of trying to get to carbon-neutral,” said Kempf.

I&M has been transitioning its power production in its service area, which includes much of northeast Indiana, north-central Indiana, and southwest Michigan. The company said with its investment in green technology, it has the capacity to generate enough renewable energy to serve over 100,000 customers. The utility currently serves nearly 600,000 customers between the two states.

Bergsma said through 2019, I&M has reduced carbon emissions by 65%, compared to a baseline level from 2000. He said the company has targeted lowering emissions by 80% by 2050.

“We are shrinking our carbon footprint by diversifying our resource portfolio, deploying technologies to mitigate risk, modernizing the power grid and working with our industry peers to achieve a low- to no-carbon future,” said Bergsma. “Within our multi-state footprint, AEP’s system-wide integrated resource plans call for the addition of more than 8,000 MW of wind and solar between 2020 and 2030.

The St. Joseph Solar Farm will be I&M’s largest solar plant with a production capability of 20 megawatts, which more than doubles the current energy production from the sun of 14.7MW.

According to company data, I&M also generates 450MW from wind energy and 22.4MW from hydropower. Still, the total energy production from renewable sources accounts for 9.1% of total production. The utility still relies heavily on coal and nuclear power.

Work on the St. Joseph Solar Farm, which will be solely owned and operated by I&M, is expected to wrap up in the spring.

Although the university no longer owns the farm or the land, the lineage to Notre Dame remains strong. The farmstead and surrounding property were purchased by a private owner who turned some of the farm, including the main milking barn into an event venue. It is now called St. Joe Farm.

Bergsma explains the educational component of the solar farm.