The organization says about 150

Indianapolis is being recognized as one of SmartAsset’s "Best Cities for Women in Tech in 2017." The cities were ranked based on criteria including the gender pay gap in tech, income after housing costs and women as a percentage of the tech workforce.

The study also measured four-year tech employment growth in each city. Indianapolis ranks fourth on the list, behind Washington D.C., Kansas City and Baltimore. Indianapolis was cited as one of several major cities without a gender pay gap.

"Median pay for women in computer and mathematical roles is around $61,497. That’s about $1,300 more than the median pay for men with the same jobs," the study said. "After paying housing costs like property taxes and homeowners insurance, women end up with about $51,393 that can go toward other living expenses and savings."

SmartAsset says women are still the minority in the tech industry with only 26 percent of computer and mathematical jobs being filled by women. Another key finding of the study is the gender pay gap isn’t getting smaller.

"Based on our analysis, we found that the average female-to-male earnings ratio is 84.8%. Last year it was 86.7%. While female tech workers earn more than their male counterparts in a few cities, more needs to be done to ensure that women are receiving equal pay for equal work," said SmartAsset.

You can find more information on the study by clicking here and you can view the top 15 cities for women in tech below: 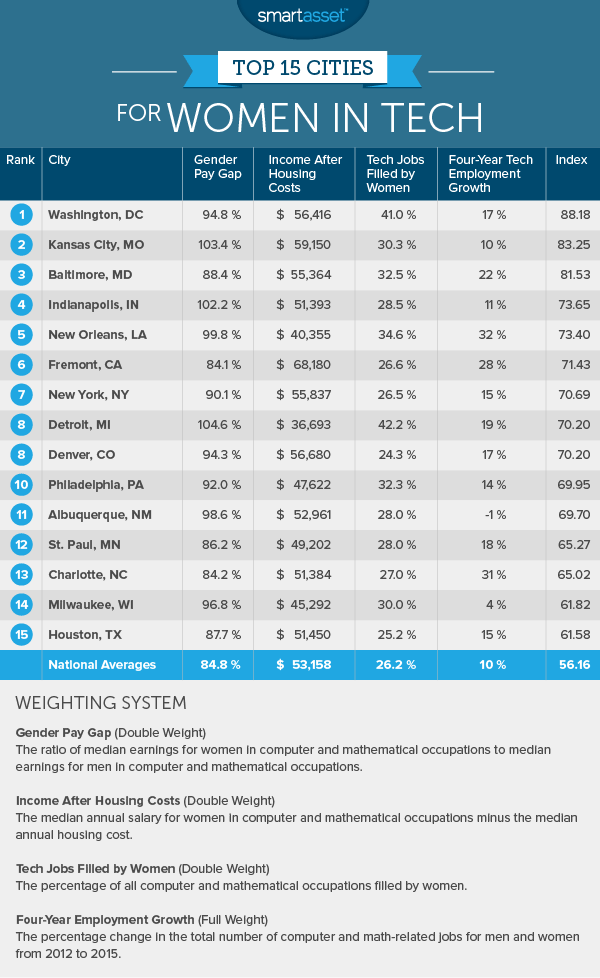