The survey is conducted by volunteer shoppers across Indiana who collect prices on specific food items from one of their local grocery stores.

One of the biggest savings is on turkeys which shows a 24% drop, or about five dollars, on the same sized bird as last year.

“If you’re headed to the store soon to get your Thanksgiving turkey, you can expect to see very affordable prices this year on a high-quality product,” said Isabella Chism, a farmer and second vice president of Indiana Farm Bureau. “Many people don’t realize that Indiana ranks fourth in the nation for turkey production, so we have many local farmers to thank for our holiday meal this year,”

American Farm Bureau Federation economists say turkey wholesale prices are up significantly, so the decrease in consumer turkey prices is attributed to competition between retailers. 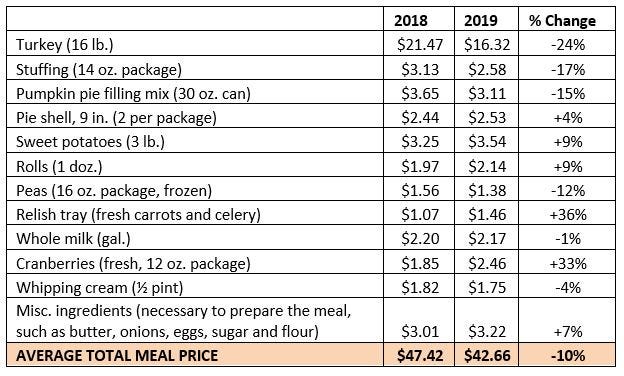 While 95% of Americans who celebrate Thanksgiving will have turkey at their meal, Farm Bureau also collected prices on a four-pound ham which goes for $9.70 about 70-cents higher than last year.

Shoppers in 39 states also collected prices on Russet potatoes, but those prices are not factored into this year’s survey. But they could get added next year, according to Indiana Farm Bureau.

Chism says while a few items may be added to the market basket survey, there won’t be broad changes because most Americans like their traditions at Thanksgiving.

“I think that’s a part of our culture here. Whether you eat sushi on Thursday, or you’re having Thai food today, Thanksgiving tends to have a certain feel to it,” said Chism. “We’re looking forward to the foods that give us comfort and bring us a sense of security.”

American Farm Bureau has been conducting the market survey since 1986.

Isabella Chism tells Inside INdiana Business how the survey works and why it matters.