While 2019 is expected to be a difficult year for many Indiana farmers, there are signs of increasing optimism about the agricultural economy. The monthly Ag Economy Barometer from Purdue University jumped 27 points from June to a reading of 153 in July.

The barometer, based on a survey with 400 farmers nationwide, looks at both current economic conditions and future expectations.

Purdue’s Center for Commercial Agriculture says the Current Conditions Index rose 44 points in July, the largest one-month movement since the barometer’s inception in 2015. “The real driver of the increase in this month’s Ag Barometer was the index of current conditions which rose from a reading of 97 in June to a reading of 141 in July,” said Jim Mintert, director of Purdue’s Center for Commercial Agriculture.

The report indicates the improving farmer sentiments coincides with the completion of the delayed spring planting and the improvement in crop conditions. Despite the optimism, the latest crop progress report from the U.S. Department of Agriculture shows the state’s corn and soybean crops are still struggling. Thirty-six percent of Indiana corn is rated as good to excellent, another 39% is fair, and 25% is poor to very poor. Soybeans have similar ratings. 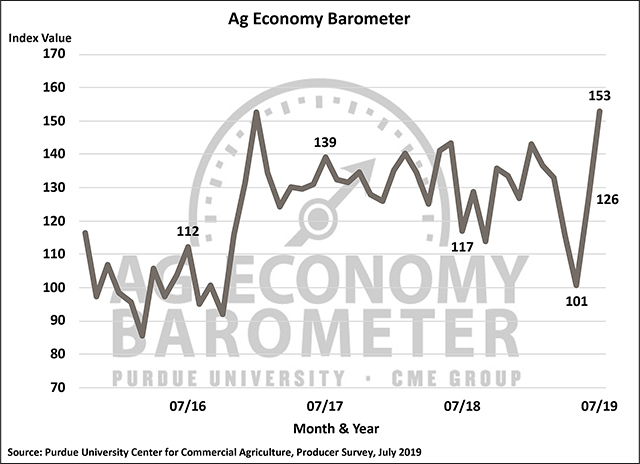 Mintert will join a panel of experts from Purdue College of Ag, Purdue Extension and USDA at the Indiana State Fair Monday August 12 to discuss the current agricultural outlook for Hoosier farmers. The event will be held at the Indiana Farm Bureau banquet hall at the fairgrounds.

Learn more about this month’s Ag Barometer and the reasons behind the improvements in the video below.