The Greenwood Redevelopment Commission has approved a project agreement for the redevelopment of the city’s former middle school property. The $83 million project, which is several years in the making, will include residential space, as well as more than 18,000 square feet of commercial space.

The project includes $68 million in private investment, which will fund the construction of seven structures that will house more than 40 condos, more than 15 townhomes, nearly 300 market-rate apartments, as well as restaurant and retail space.

The remaining $15 million will come from public investment that will fund a city-owned, more than 500-space parking garage, as well as street improvements and site improvements such as more than 450 additional surface parking spots in and around the property.

The city says bonds to fund the project will go before the Greenwood Common Council for approval.

“This is an important milestone in our effort to revitalize Old Town and ensure its future as a thriving core that is walkable and connected to trails, parks and dynamic public gathering spaces,” said Greenwood Mayor Mark Myers. “We’re creating diverse, authentic amenities, seamless integration of greenspace and opportunities for all ages to live, work and play in downtown Greenwood.” 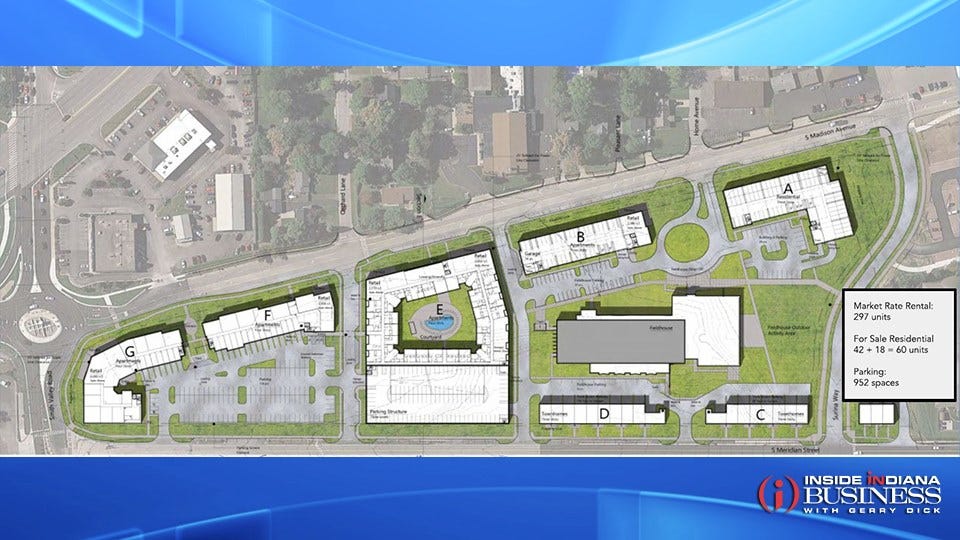 The city says the project will generate $1 million in additional annual tax revenue, increase nearby property values, and will have no impact on the city’s general fund.

The project is being developed by Carmel-based CRG Residential and Great Lakes Capital in South Bend. Myers says the city received numerous proposals, but CRG and Great Lakes “understood our priority to remain authentic and build upon Greenwood’s historical and cultural foundations.”

The city did not provide a timeline for construction to begin.

However, construction continues on a new downtown fieldhouse that will anchor the redevelopment of the former middle school property. The project includes renovations to the school’s former gymnasium that include an elevated indoor running and walking track, two multi-purpose turf fields, basketball and volleyball courts, and several indoor pickle ball courts.