Greenfield-based Elanco Animal Health Inc. (NYSE: ELAN) is making a major statement about its future in Indiana. The company has announced plans to relocate its global headquarters to a new 45-acre campus at the site of the former GM Stamping Plant in downtown Indianapolis as part of a $300 million investment to make Indiana its base of operations. Elanco says the massive investment will retain more than 1,600 jobs and create more than 570 jobs over the next decade.

Elanco, which became the second-largest animal health company in the world after this year’s $7 billion acquisition of Bayer Animal Health, says the new site in downtown Indy will allow it to consolidate its global operations and more than 1,000 team members at one location.

The company says it will also retain its existing manufacturing centers in Clinton, Indianapolis and Terre Haute, and plans to center its research and development activity in Indiana.

“With a shared vision for the future of the agbioscience industry in Indiana, we are pleased Elanco can serve as a catalyst through our global headquarters and base of future operations in Indianapolis,” Jeff Simmons, chief executive officer of Elanco, said in a news release. “In partnership with Governor Holcomb, Mayor Hogsett and IEDC, we look forward to continuing our nearly 70-year history here and serving our new community. Indiana has created a strong environment for business, and we have deep appreciation for local leaders that have worked to position the Hoosier state for the future.”

Elanco expects to break ground on the new Indy campus in the first half of 2021. Construction is anticipated to take two to three years to complete. 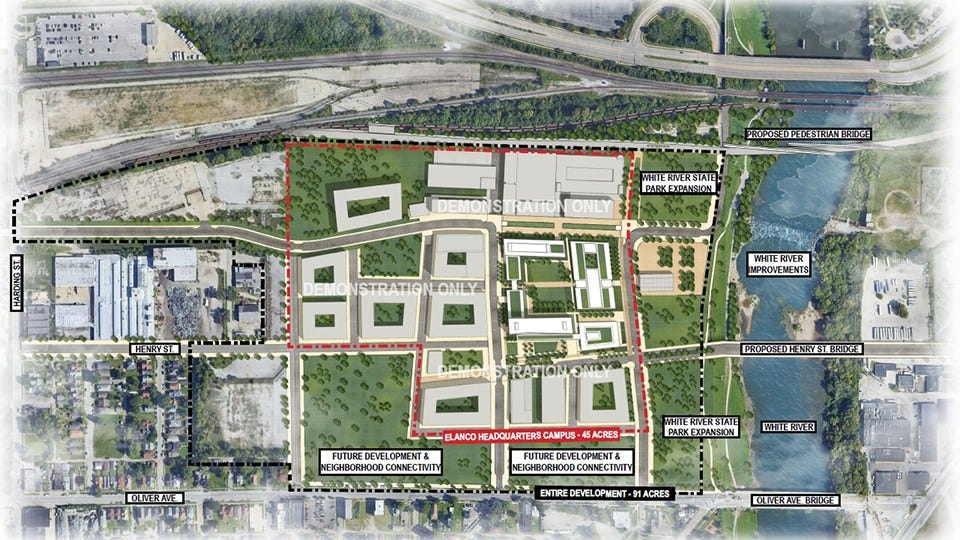 The 91-acre GM Stamping Plant site has stood vacant since 2011. The Indiana Economic Development Corp. reached an agreement with Ambrose Property Group in Indy to purchase the site, which had previously been slated for a mixed-use development called Waterside. Those plans were scrapped after Ambrose decided to offload the project as part of a business shift, which led to a dispute with the city over ownership of the land.

The IEDC says the campus will be anchored by Elanco’s 45-acre headquarters, which could be expanded to 65 acres if the company exercises a restricted land option. An additional 10 acres of outdoor space could be used for an expansion of White River State Park with the remaining land being available for future mixed-use development.

“Elanco is an important asset to Indiana – a leader in our growing agbioscience sector, which is poised to grow and continue innovating,” said Governor Eric Holcomb. “We are thrilled with the direction of Elanco’s future and the transformational impact its growth will have on the agbioscience sector, the downtown Indianapolis footprint, and most importantly, the lives of Hoosier workers.”

The Indiana Economic Development Corp. and the city of Indianapolis are offering Elanco up to $150 million in incentives for the project. Elanco will not be eligible to claim a majority of the incentives until Hoosier workers are hired for the new jobs.

Indiana Secretary of Commerce Jim Schellinger will appear this weekend on Inside INdiana Business with Gerry Dick to talk about the project.