The Dual Language Immersion Pilot Program is in its second year.

The Indiana Commission for Higher Education is urging state colleges and universities to keep undergraduate tuition and mandatory fee increases to a minimum. The commission has adopted a recommendation which calls on the state’s public institutions to hold their increases to no more than 1.4 percent in each of the next two years.

State law requires the commission to set recommended, though non-binding, tuition and mandatory fee targets every two years for each of Indiana’s public colleges. However, it is ultimately up to each college’s board of trustees to set their tuition rates.

"Indiana’s recent tuition increases are the lowest in nearly three decades and among the lowest in the nation," said Indiana Commissioner for Higher Education Teresa Lubbers. "Our latest tuition recommendations aim to continue this trend to ensure college is affordable for Hoosier students and families."

You can view the commission’s recommendations for each public institution in the graphic below.

The commission says, per state law, Indiana colleges and universities must hold a public hearing no later than 30 days after it sets its tuition recommendation. The institutions must set their tuition and fee rates no later than 60 days after the biennial state budget is enacted. 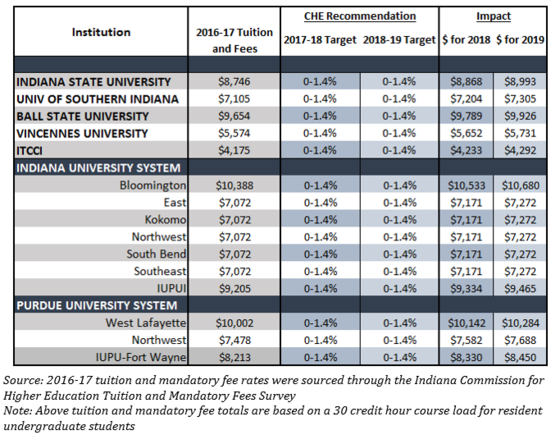