(image courtesy of the Rethink 65/70 Coalition)

The Indy Chamber Foundation has received a $475,000 grant for a study to explore the reconstruction of a heavily-traveled portion of interstate in downtown Indianapolis. The funding from Lilly Endowment Inc. will support the effort to identify multiple design alternatives for the “Inner Loop” of I-65/70, which Indy Chamber Chief Policy Officer Mark Fisher says will help create a long-term vision for what the downtown interstate system could look like.

In an interview with Inside INdiana Business, Fisher said the study would exclude the North Split, where reconstruction work has already begun.

“This is an opportunity for us to really engage the community to help us understand what we would like to see in downtown,” said Fisher. “Downtown is the economic hub of our city, our region, and our state. It works because of our ability to efficiently move people and goods in and out of downtown, but we also want to make sure that we are designing a downtown that continues to support that growth and investment, both residential and business investment.”

The foundation says it will partner with the Rethink 65/70 Coalition, community leaders, and city and state officials to envision the long-term possibilities for all legs of the Inner Loop, minus the North Split. Fisher says those options range from a complete rebuild of the current interstate system to a recessed-highway approach, which could create better connections downtown.

“As the residential growth of downtown moves out of the mile square and into the neighborhoods, we want to make sure that we create that better connectivity for the residents of Indianapolis,” said Fisher.

In addition to cost, according to the foundation, the study will touch on other factors, such as traffic flow and safety, environmental justice, and air quality impacts, as well as potential impacts on neighborhoods, businesses, and downtown connectivity and mobility.

The entire process will be guided by an advisory council organized by the foundation and the Rethink Coalition.

Fisher says the grant funding allows the foundation to engage global design and engineering firm Arup Advisory Inc., which will lead the study and help create a financial picture for multiple options of reconstructing the downtown interstate system. He says the study could take 8-10 months to complete and early next year, the group will work to reach a community consensus around the multiple options that will be explored.

“We’ve really worked to build an advisory group that involves neighborhood residents, major employers, community groups and to make sure that all voices are heard as we go through the study process, but also as we look to do outreach when the study is concluded, to make sure that whatever is produced has the full buy-in of the community and that we can really create that vision.”

Fisher adds this will be a long-term process.

“This isn’t going to happen in the next five years; it’s more of a 10 or 15-year outlook. So we can really start to create that vision and help people plan and really enhance the connectivity between the downtown central business district and the residential neighborhoods.”

You can view the members of the council in the image below: 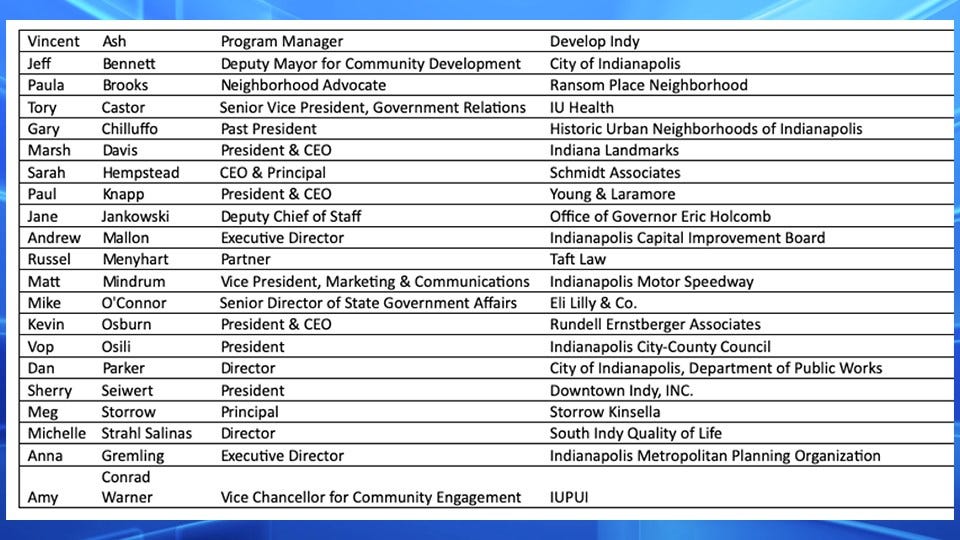 Fisher says the study would exclude the North Split portion of the interstate, where reconstruction work has already begun.