Construction on a 23-story hotel in South Bend is continuing, after being delayed by the COVID-19 pandemic and a lack of construction workers. The Pokagon Band of Potawatomi is building the 317-room hotel adjacent to the Four Winds Casino. The tribe first announced the project in September 2019.

“COVID messed up the construction timelines plus the cost to be quite honest with you. And the shortage of labor. It pushed us back many months,” said former Pokagon Tribal Council Chairman Matt Wesaw in an interview with Inside INdiana Business.

When the project was first announced, the Potawatomi expected two years to complete the project, but now it appears it will take three. The South Bend Tribune reports construction was paused in March 2020 because of the pandemic.

“We’re up to about 15 floors right now. They’re pouring a floor a week. So, it is going up quick,” said Wesaw.

The project includes the addition of 40,000-square feet of gaming space. The Pokagon say the addition was needed, especially since the casino recently received approval for Class III gaming.

Wesaw says the casino removed upwards of 400 Class II machines to make room for the new gaming tables. But with the additional space, he says they’ll be able to bring those games back. They expect to complete the gaming space expansion in the first quarter of 2022.

“The additional gaming space will be completed before the hotel,” said Wesaw. 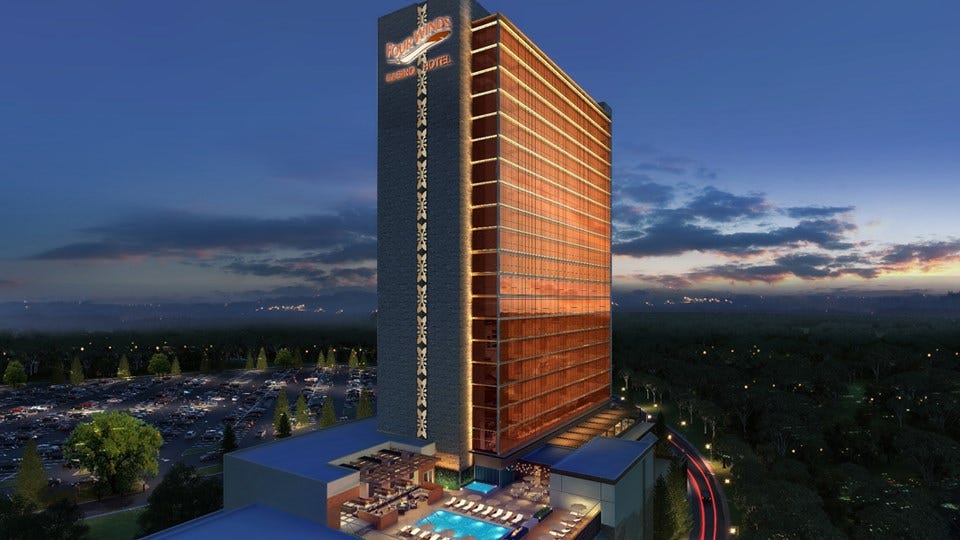 Once complete in the fall of 2022, it will be one of the tallest structures in St. Joseph County.  Only Liberty Tower in downtown South Bend is taller with 25 floors. With more than 300 rooms, it will be the largest hotel, surpassing the Doubletree downtown’s 291 rooms.

Three weeks ago, Potawatomi leadership was joined by state and local officials to celebrate the Class III gaming compact, which allows it to operate Las Vegas-style games. Class II license options, which the casino used since its 2018 opening, limited the gaming options.

“The compact is very important to us because now it allows us to compete at an even level with all the commercial casinos in the state of Indiana,” Wesaw told Inside INdiana Business. He says it means more revenue for tribal citizens and additional money for the Pokagon Indiana Educational Fund.

“We’ve got a million dollars set aside out of this fund that will allow any Pokagon citizen here, regardless of residency, to attend any state funded school in the state of Indiana,” said Wesaw. “We have always had a big emphasis on education. That’s one of the things that we need to do to break that cycle of dependency.”

The new compact also means additional revenue for Indiana’s coffers. The casino will be sharing 8% of its revenue generated with the state. Under the previous license, the casino did not have to share revenues.

The casino celebration was one of the last officials acts for Wesaw. The Pokagon Band of Potawatomi Indians recently elected its new tribal council members, which did not include Wesaw, who decided not to run for re-election. The Pokagon says Rebecca Richards has been elected Tribal Chairwoman, the first female chairwoman since the tribe received its federal restoration in 1994.