Governor Eric Holcomb was on hand for the announcement. (photo courtesy of Stellantis)

Stellantis says it will invest nearly $230 million to retool three of its plants in Kokomo. The automotive manufacturer, formerly known as Fiat Chrysler Automobiles, says its Kokomo Transmission, Kokomo Casting, and Indiana Transmission plants will shift to produce its fourth-generation eight-speed transmission, a move which will retain more than 660 jobs in the Howard County city. Stellantis says the move will help reach its goal of achieving 40% low-emission vehicle sales in the U.S. by 2030.

The fourth-generation transmissions, Stellantis says, will have the flexibility to be paired with traditional internal combustion engines, as well as mild hybrid and plug-in hybrid propulsion systems. They will be used Jeep, Ram, Chrysler, and Dodge vehicles.

“This investment and this transmission represent an important stepping stone in getting us to 2030 and further expanding our battery electric offerings,” Brad Clark, head of powertrain operations for Stellantis, said in a news release. “This new eight-speed is the ‘multi-tool’ of transmissions. It is a versatile transmission that can be adapted for a variety of applications, allowing us the flexibility to adjust our production as consumer demand for electrified vehicles grows over the next decade. It also offers consumers the opportunity to get familiar with this technology and explore all of the benefits that can come from electrification.” 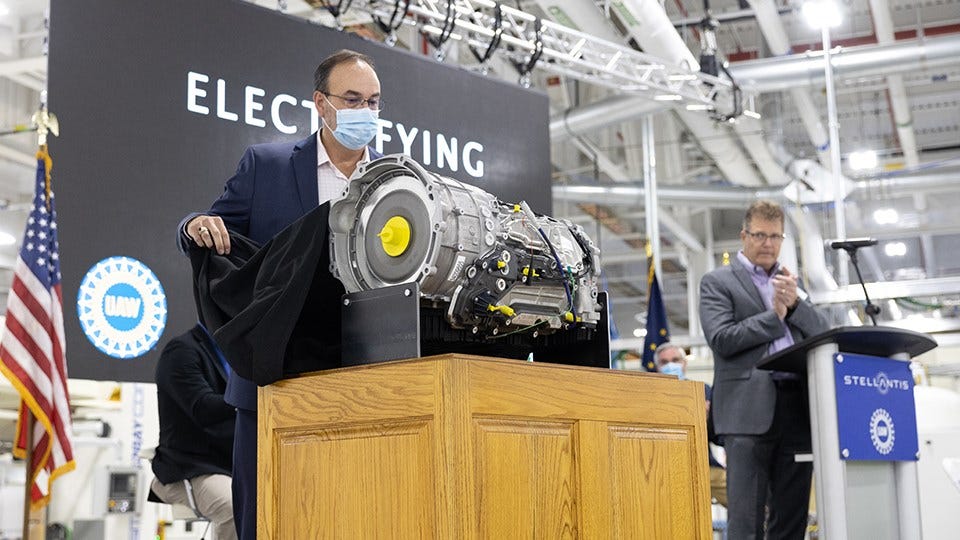 The automaker says the investment leverages the core manufacturing competencies of its Kokomo operations, as well as the local workforce. A portion of the investment will be used to retrain the 660 employees into hybrid transmission manufacturing roles, which the company says would be met with increased wages, subject to the 2019 United Auto Workers collective bargaining agreement.

“As our industry continues to change, our focus must continue to be on our most valuable asset – our people,” he said. “This transmission program will bring new opportunities for our current workforce, as well as the manufacturing workforce of the future.”

The investment comes about a year and a half after Stellantis, then FCA, announced plans to invest $400 million to repurpose the idled Indiana Transmission Plant II and rebrand it as the Kokomo Engine Plant and create nearly 200 jobs. The facility will produce the GMET4 engine used in the Jeep Wrangler and Jeep Cherokee vehicles, with production expected to begin later this year.

“I appreciate the confidence that Stellantis continues to show in the skills and abilities of our dedicated local workforce,” said Mayor Tyler Moore. “As the automotive industry makes this shift towards alternatives like electric vehicles, our workers in Kokomo are well-prepared to take up the challenge to adapt, re-focus and excel in new technologies.”

The Indiana Economic Development Corp. has offered Stellantis up to more than $19 million in conditional tax credits and $300,000 in training grants, which the company will not be eligible to claim until Hoosier workers are hired for the new jobs. The city of Kokomo will consider additional incentives.